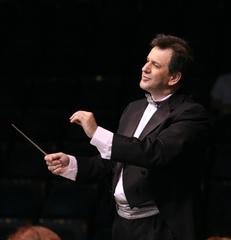 In May 2015 he made his conducting debut at the Concert Hall of the Kennedy Center for the Performing Arts.  Dimitar lives in Annapolis, MD with his wife Nicole and Mecho (an over energized American Eskimo).  ​

The Conductor, Pianist and Educator​

Dimitar Nikolov, a versatile conductor, pianist, and educator, has conducted numerous orchestral and opera performances in the United States and Europe. Audiences have been impressed by his ability to energize the orchestra and to produce unique sound within a large dynamic range.

​​Dimitar Nikolov has a DMA degree in Orchestral Conducting from the Catholic University of America where he studied with Maestro Murry Sidlin.